Roman Thrace: Diplomacy and the Greek Cities of the Aegean Coast

Roman diplomatic arrangements in Aegean Thrace are usually reconstructed through literary sources and epigraphic documents. Sometimes coins corroborate the evidence, but archaeological data can rarely be of any help. The main focus of this paper is to combine the existing literary, epigraphic, numismatic and material testimonies related to the diplomatic means used by Abdera and Maroneia, the leading Greek cities of the Aegean coast, from the 2nd century BC until the reign of Hadrian, in order to establish their position in the Roman world (fig. 1). 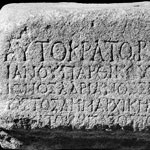